The Importance of Pricing Tables and Testimonies

I am currently in the process of redeveloping the agency I run, and I wanted to get an outside opinion on some matters that I need addressing. We already have an established brand and a rather decent following, which makes my life that little bit more difficult.

1. The company has naturally progressed from a service for the music industry to a multi-national corporate & music service. Having developed from the music industry, we have a substanial following on Facebook - many of whom are fans of the bands we have worked with, or bands themselves.

- Would you say a following on social media is more important than showing offers (for example for our printing service)?​

2. We've always had this air of exclusivity, which I have always liked. Instead of a potential client being given a quote either via a pricing table or automatic quote system, they have had to get in touch with us to get a quote - giving them a personal service and a human to speak to.

- Is this outdated and pointless now? Are people too lazy to get in touch, and would much rather just have the price there infront of them?​

3. Testimonies are worth it, I think we can all agree on that but;

- How do you gauge what's important to a potential client, and what's not?​

3a. We've worked with some large names (BAE Systems, The Royal Navy, Universal Music to name a few) and I don't want our agency site being slathered in testimonies.

1. From an seo point of view, Facebook is a great tool for getting content out there, helping to get blog posts shared and building links but people don't usually share 'special offers'. Why would they?!.. Even if they agree that your 500 business cards for £2.50 is an epic deal,.. they know their facebook friends wont really care, they're far more interested in funny pictures of cats or "top 10 epic...." links. With that in mind, use facebook to encourage sharing of your content, blogs etc.. If you like, drop in the odd special offer but avoid your facebook page reading like a never ending list of discounts. Remeber, it should always be a link through to your site, and including an interesting/funny/engaging picture will make your post more visible on a page full of status updates.


2. Think about a customers journey through your site. Is it more off putting for your client base to be able to see pricing information then take that information into a conversation. Or have to start the conversation before they can get the information?


3. Testimonials are important from a trust point of view but theres no rule that says they have to be text based. You've worked with BAE Systems, The Royal Navy etc.. their logos under the heading "people we've worked with" is enough of a visual indicator to any visitor that you're a credible company with ethics and standards.


3a. If you've worked with a company who's name carries a notable status, use it to your advantage! Nothing says "we're up there with the best" like being associated with a bluechip company.
T

You do pose some good points. I posted this in the .com forum, just to see what they'd say and there's some differing arguments which I'll post below;

2. Agencies don't post prices. I've not ever dealt with an agency that did (and going on 17 years now.) Think about the clientele you want. Do you want the click-buy or the client who will take the time to interact?

3. Testimonials? I don't even look at them. Nor do I write them. Nor do I post disparaging remarks on a social media page. No one is perfect. We're far more interested in references and results than testimonials of any kind

In my opinion, there's only one point there which I would agree with them - 2. Simply because we'd rather build a rapport with our clients than to have a "Click & Collect" service. I completely disagree with 3 and 4 from the .com forum - BigDave, you point for 3 is actually something I had never thought about, so thank you.

Accepting your point on 3 and 4, I've now hit another issue, which if you could resolve, that would be wonderful. You say that "their logos under the heading "people we've worked with" is enough of a visual indicator to any visitor that you're a credible company with ethics and standards." however, at what point do you stop with the logos?

I didn't want to toot my own horn by listing the big clients we've had, but for the purpose of this question I shall; BAE Systems, The Royal Navy, Universal Music, Red Bull Records, BBC, Aston Martin, Warner Music Group, Sony Music Entertainment, Lockheed Martin, Clarks and The Glastonbury Festival.

While we love exclusivity, we also like working with local and smaller businesses. I fear that by adding all of these logos to "People We've Worked With", it could put off smaller and local businesses from working with us - for fear of us being too expensive.

How would you show smaller & local businesses that we love working with them, as well as the big guys?

Are you in anyway accredited? Businesses of all sizes can take reassurance from an easily recognisable accreditation...

For example, this was taken from the footer of a digital agency's homepage and speaks volumes about the quality of work and the skill level of the staff:

You then have to look quite hard for any other trust building signals but when you find them, they're not shy about their achievements: 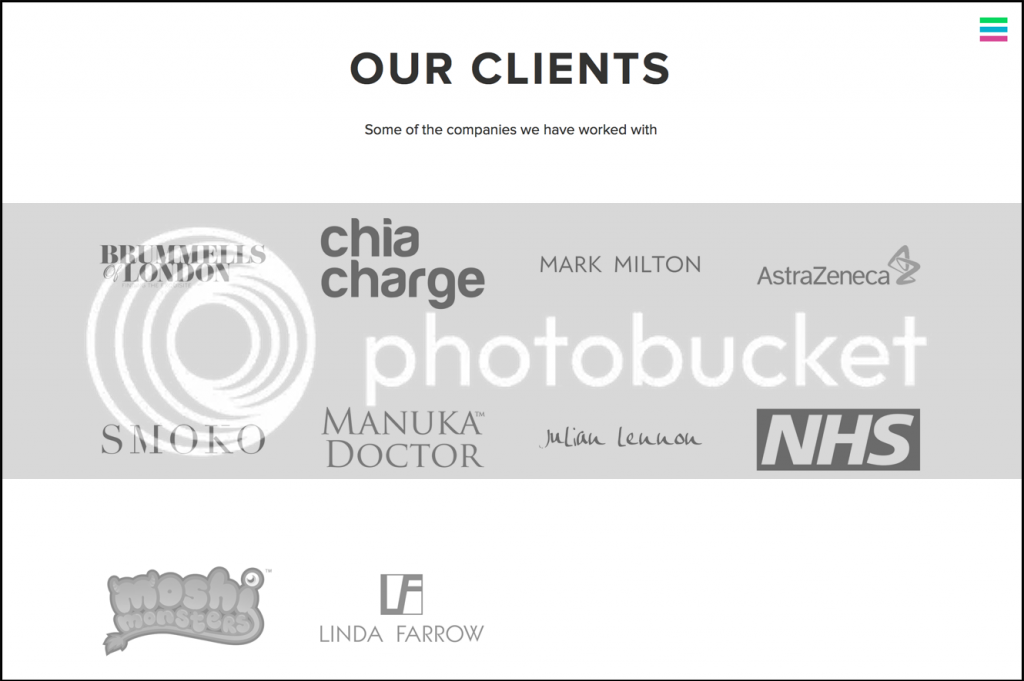 1. Different sites/businesses benefit from different social media. Some perform better on Facebook than they would on LinkedIn and vice versa. A following on Facebook could give you some credibility, plus some followers just like to see new work and interact with an agency that creates work they like. Trying to sell to them probably won't work, so use it to interact with fans and build up your 'rapport' with people.

2. You're selling a service, not products, so pricing tables are a bad idea. Projects differ so each one should be charged individually. When I see an agency with fixed prices, I normally assume it's a sole-trader looking to attract clients based simply on price, or an Indian company who can afford to undercut. I'd generally avoid any design service that's fixed price unless that price was negotiated between the client and designer based on the brief.

3. Testimonials work, but only if they're credible and preferably by someone who's recognised in the industry or is part of a well-known brand. A testimonial from Joe Nobody won't really do you any favours, but a positive statement about you and your work from the right person, in the right position on your site, can go a long way. Your DotCom poster appears to be mixing up a testimonial with a review.

3a. Again, if these are recognisable brands they can do wonders for your credibility, but if they're smaller, unheard of companies, they may just be extra clutter.

If you have a social page, people will let you know what kind of job you are doing. But keep in mind, people are far more likely to take the time to bitch about some little offense than they are to take the time to say something nice.
Click to expand...

I agree with this, people are much more vocal about a brand or service when they're disgruntled, and they often have a tendency to exaggerate a little too. Use with caution.
R

Pricing is a hard one to get right. I always base it on each project, but have a flat rate in your head. And stick to it. Pricing tables are a bad idea, as it can be off putting for some people.

I would agree with what Dave said and having accreditation's is really good. Even better when they are verified, such as Google Certified and Magento etc.